« Back to Tripod team page 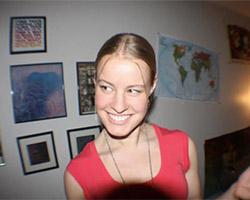 Megan really likes hats. She wears a lot of them, and no matter the hat, she's always rocking it with a smile. Sometimes the Biz Dev Cap is her hat of the day; other times it's the Marketing Strategy Cap; still other times, the PR Cap is what's most appropriate. No matter the outfit, she knows how best to accessorize.

So how does one build such a wardrobe? At least in Megan's world, it's all about diving in headfirst, so to speak. Her love affair with start-up culture started way back in 2006, during her college days as an aspiring journalist at Ohio University.

Little-known fact: the National Business Incubation Association is headquartered in Athens, Ohio. Even lesser-known fact: Megan started her career at NBIA while finishing her studies at OU. She was wide-eyed and bushy-tailed, enthusiastic, and had absolutely no idea the difference between VC and Angel investors (or even what VC stands for). But she figured it out, along with figuring out exactly what comprises "business incubation" and, in turn, the journey that defines "business development." She then did a stint writing policy and speeches for the Welsh Assembly Government, where she appeared as a spokesperson on BBC Wales. Upon returning Stateside, she did some writing for Smart Business Magazine, a how-to trade publication from middle-market executives. But as Lehman Brothers made headlines and the rest of the economy followed, she decided to wait out the recession in the mountains. She moved to Aspen, hanging around the Aspen Institute and getting exposed to people far more talented than she could hope to be; now, she lives in Boulder, still hanging out with incredibly talented and cool people.

While many people call her a shark, she thinks of herself more as a feeder. She feeds off others' energies. Give her your thoughts and energy, and she'll package your story. Her preferred meetings are those in which she speaks for about 15 minutes of every hour. After all, how else is she going to tune into your voice?

Marketing and PR are among her favorite arenas. When dealing with the press, she feels right at home. Looks like that journalism degree worked out after all.

Favorite answer: Why not?